6 years. That’s approximately how long since I’ve written a post in my personal site. Lots of things happened since then, but about 2 years ago I decided that it was time to start writing again. Yeah, you read that right: 2 years ago. And this post will describe why it took so long and what happened since then.

My old personal site was, actually, a Tumblr. It had many limitations but, for the purpose of sharing my thoughts, it was enough. And, together with a custom domain, it did the trick for some time. 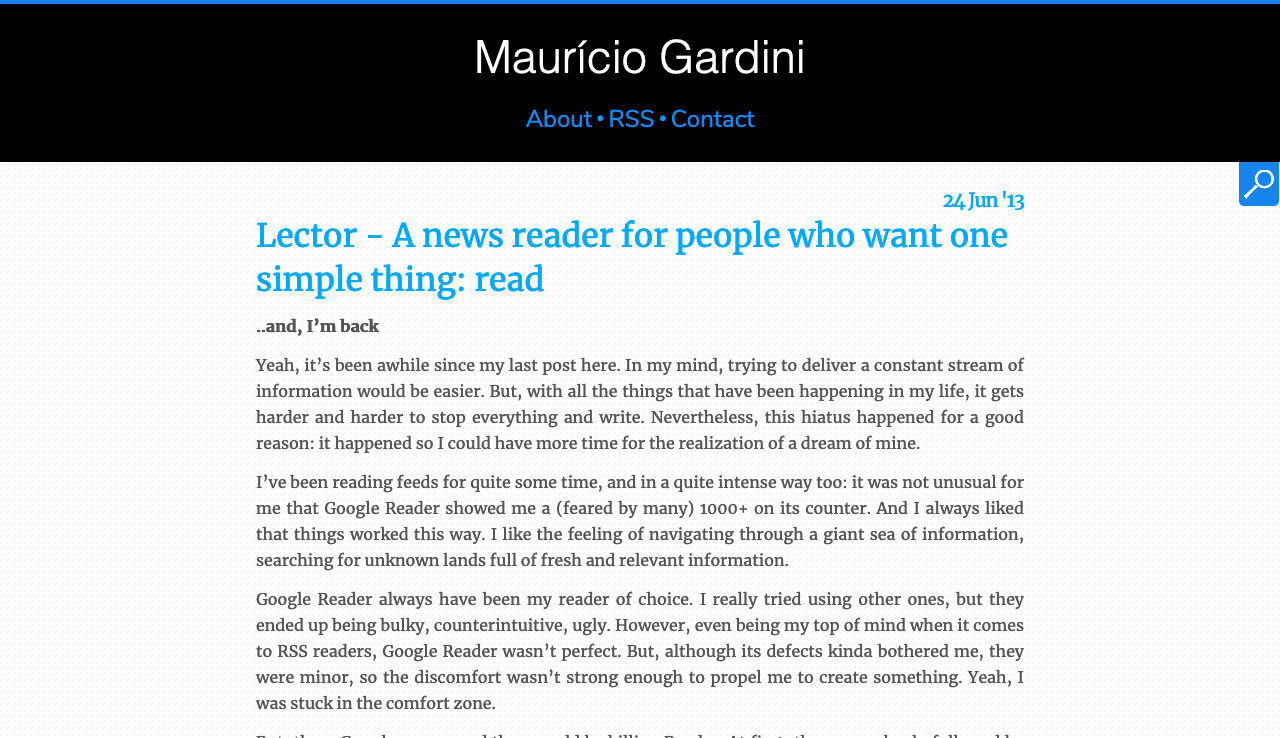 Screenshot of my old site.

I posted for some time on this site, but… Well, “life” happened since then: an 8-6 job, college at night… Everybody does that, I know. It shouldn’t be an excuse for this. But, at the time, it was enough of a hassle for me to stop writing.

Despite not writing, I kept on reading a lot. And, with that, I frequently found content that I felt the need to share. For this purpose, I used Facebook. But, in the middle of 2014, I was feeling more annoyed than pleased on being a Facebook user, so I deactivated my profile on it (I kept it this way until 2016, when I reactivated it and since then I use it as a “read-only” media).

With the deactivation of my Facebook, the main place that I had to share the interesting content that I found during my daily online reading didn’t exist anymore. So I started using Twitter as a tool to share these links. But, as I am not an active social media user, my Twitter profile ended up being a collection of links. Again, it wasn’t that appropriate as well, but it was what I had at my reach at the moment.

In the end of 2015, I finally finished my Graduation on Computer Science. It was a milestone in my life, both for the knowledge and friends that I got from that, but also from the extra time that I would have from now on.

In the meantime, I got increasingly interested in beer, as a drinker and as a self-learner on the subject. So, in 2016, I became an affiliate of CervaSerra, a local homebrewers association. With that, I became exposed to a whole lot of new information, and it made me interested in studying and producing content about it as well.

During 2017, I decided that it was time to create a more appropriate media to share my thoughts. And then my effort to make my new site started.

From the start, I had decided that my new site would be static. With that, I hoped to have:

Going back to my older times, when I was exposed to Ruby during the development of the now defunct Lector, I remembered of Middleman, a Ruby-powered static site generator. And, then, I started creating my new personal site with it.

But, for reasons that I don’t remember that well at the moment, I felt that Middleman wasn’t what I was looking for. Looking for alternatives, I found Hugo, a Go-powered static site generator. And, again, I started working on my new site using that.

I fiddled around with Hugo for a lot more time than with Middleman, but after that I felt that Hugo was closer, but not what I was looking for either. And, looking for more alternatives, I found my weapon of choice: Pelican, a Python-powered static site generator.

Pelican probably isn’t better or worst than Middleman or Hugo, I know. But, probably because it’s made in Python, which is my day-to-day language, and also is a language that is closer to my heart, I felt more secure on using it.

Having high standards about the things that I create, I knew that, even though I had chosen the tool that I would use to create the site, it wouldn’t be a simple and short job.

Initially, I thought about choosing one of the themes that pelican themes provides. “Yeah, I’ll do that, so i can focus on the content”. Yeah, right.

I wanted something minimalist, focused on the reading. I found some themes that had this thought as its main purpose, but they weren’t exactly what I needed. “Oh, really? What a surprise!”, you may say. I know, I was just delaying the inevitable: I was going to create my theme.

And so I did it. I wanted it to be minimalist, focused on reading and as CSS-only as possible - and it was what I think that I achieved -, although I needed a little bit of (vanilla) Javascript here and there (Not that much, though).

Having a focus on reading, I thought that appropriate font sizing was really important. So, I tried to implement the concept of Modular Scale. Or, as the Modular Scale site says, “a multi-stranded modular scale”, as it uses more than one ratio. I don’t have a broad knowledge on typography, so I don’t know if I got it right, but the result of trying to apply it was satisfactory for my lay eyes. 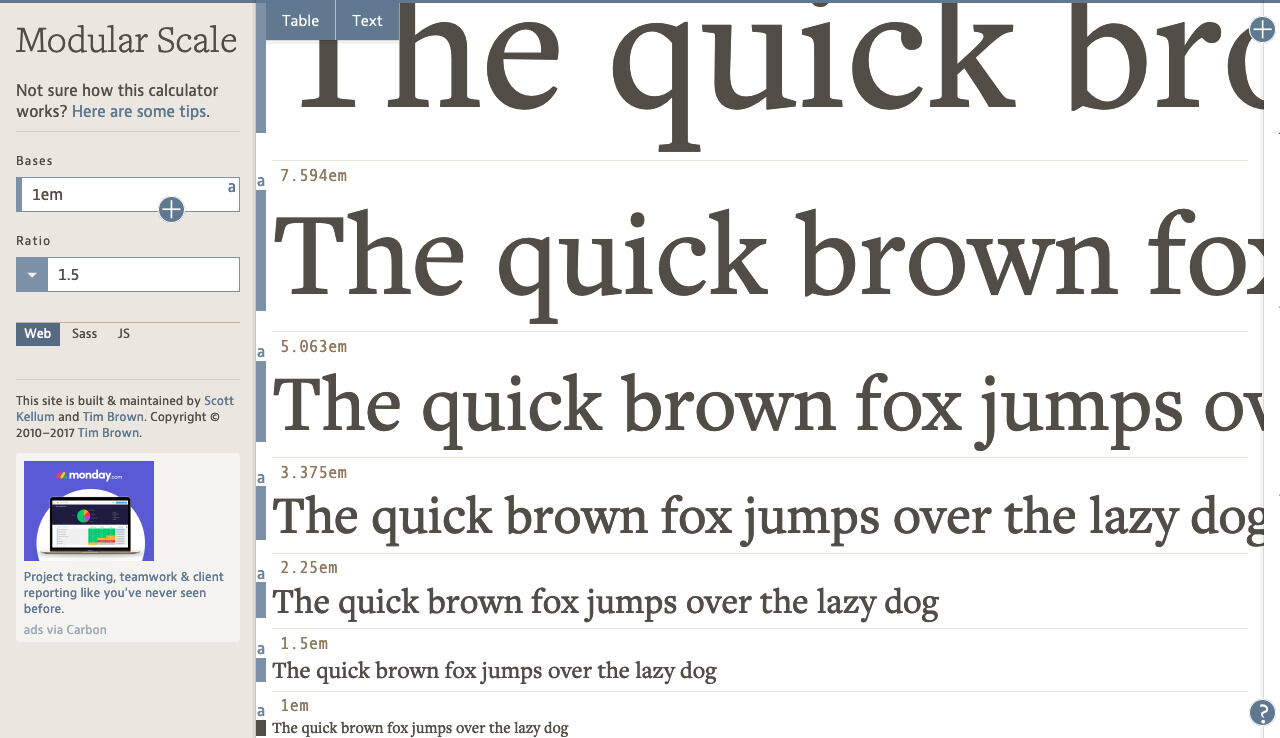 I also wanted to implement search. Normally, it requires a back-end, or to use a third-party alternative, like Google. There is a pelican plugin, tipue search, that implements that, but it relies on jQuery, and I didn’t want to add that dependency. Searching for an alternative, I found Joe Vennix’s implementation of a search engine that relies on the RSS feed to make its searches. Looked good enough for me, but it also had jQuery dependency. As it was smaller and simpler than the Pelican Plugin, I decided to convert his implementation to a Vanilla Javascript one, and so I did. I’ll make a post about it in the future.

When you work with an open source project, you have the opportunity to be helpful, either by helping the others to achieve their goals by answering doubts, for example; or by making a code contribution.

Despite all my time with programming, I had never submitted a pull request to a project in Github. Again, I blame myself for not doing that yet, and more specifically I blame my self-confidence.

But, during the creation of this site, I was instigated to make a contribution to the Pelican project to solve the lack of a feature that I thought that was interesting. And that’s exactly what I did!

Of course, contributing to a project has its rules, and I didn’t know them, so I can’t say that the process was completely seamless. But there’s some learning in everything, and once I surpassed these difficulties, I managed to make my commit to pass the tests and now I have a pull request that is ready to be merged.

Having said that, making this pull request (and managing to make it eligible to be merged) gave me courage to contribute more and, if I feel that I can help in some project, I’ll probably feel more capable now.

During the creation of this site, obviously I had to produce a lot of code. And, for that task, every developer has its favorite text editor.

But, then, I started having problems with some default plug-ins, which were producing behaviors that were undesirable for me. So, I disabled one plug-in, then I had to disable another, and another… And, soon enough, there wasn’t many differences between using Atom the way that I was using and using Notepad or something similar. Maybe the color coding and the file tree would be missing, but there wasn’t much more than that.

So, I decided to go back to my trusty friend: Vim. It was my editor of choice for about 4 years and, after a year of Atom, here I was back at Vim again. 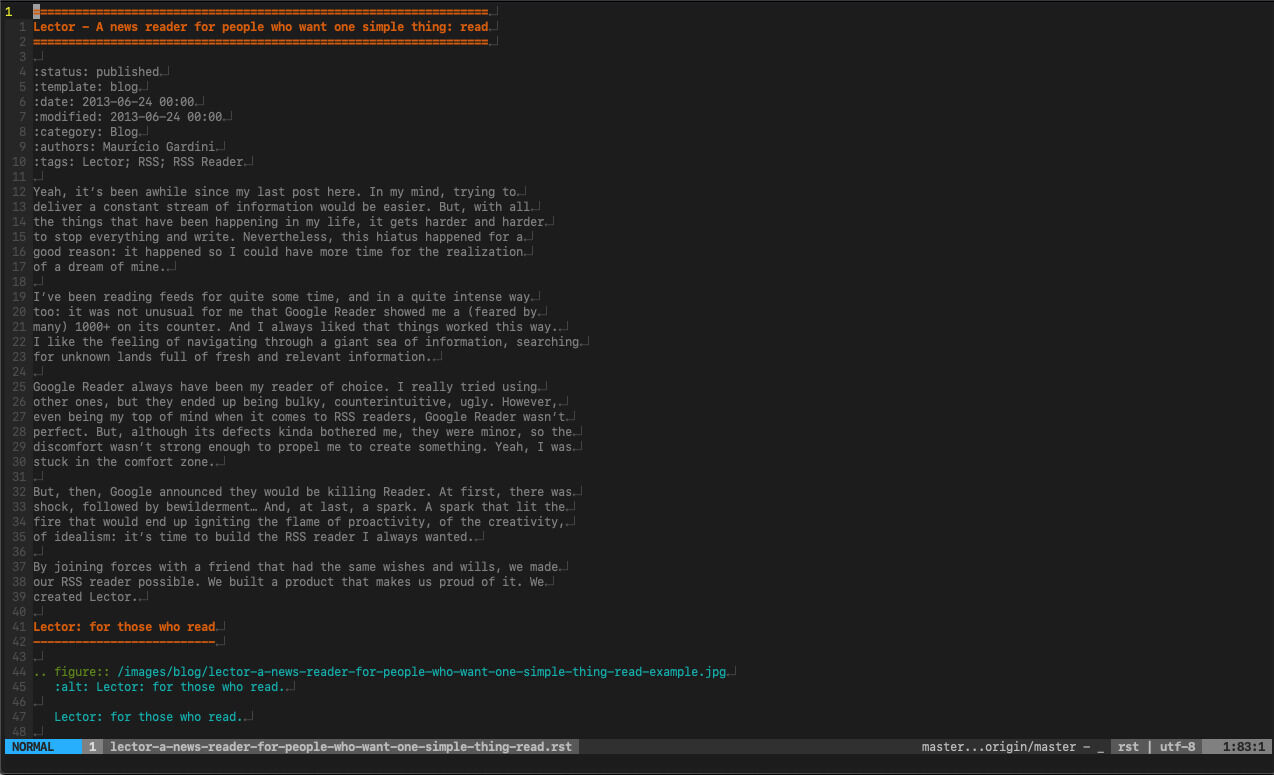 As nobody that I know use Vim with its default configuration as a day-to-day editor, I fiddled around with .vimrc and plugins for quite some time. So, expect some texts about this editor as well. There are many knowledge nuggets to be shared.

There’s room for all!

As I stated above, there is an urge to write, but it isn’t limited to programming, tech stuff and life blog, subjects that used to appear on my old site and still will appear here under the Blog section.

I’ll also use this space to post beer-related stuff:

Also, as I said before, I stumble upon interesting links that I want to share. Then, there’ll be a place to post this content. My areas of interest are the broadest possible, so there isn’t a particular theme that will surpass amongst the others. For these unpredictability, I’ll file these posts under what I call Curated Randomness.

At last, as there is some book reading as well, when appropriate I’ll share my two cents about the Books that I read.

…and that’s pretty much it.

I really hope you can find something of your interest here.

I worked really hard to create this site and will do my best to keep creating and sharing quality content. After all, there’s a lot to be discovered and learned out there!